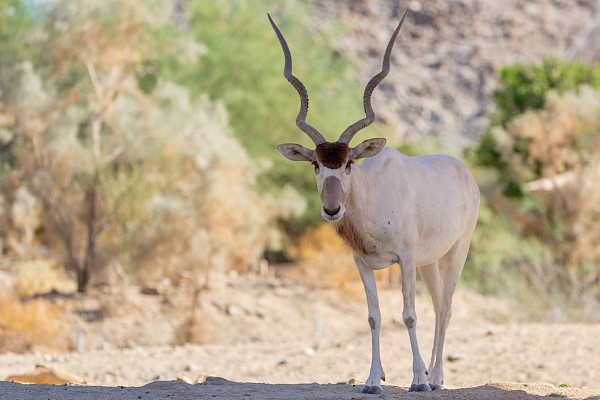 The sandy and stony regions of the Sahara Desert, particularly dune regions. They have adapted to life in hyper arid areas.

To protect themselves from strong winds and the glaring sun during the day, addax dig ‘beds’ into the sand with their forefeet in which they rest, often in the shade of boulders or bushes.

Heavily built with short legs and long spiraled horns on both sexes. Coat color is white in summer, darkening gradually in winter. On the forehead is a tuft of dense black hair which resembles a toupe’. A band of white hair forms an “X” across the nose.

They are most active from dusk until dawn. Superbly adapted to desert conditions and can go most of their lives without drinking water. They get moisture from plants and the dew which collects on them during evening and early morning. Their light color helps to deflect heat from sun; their broad, flat hooves facilitate travel on desert sands. Daily variation in body temperature reduces the need for evaporative cooling, thus conserving water.