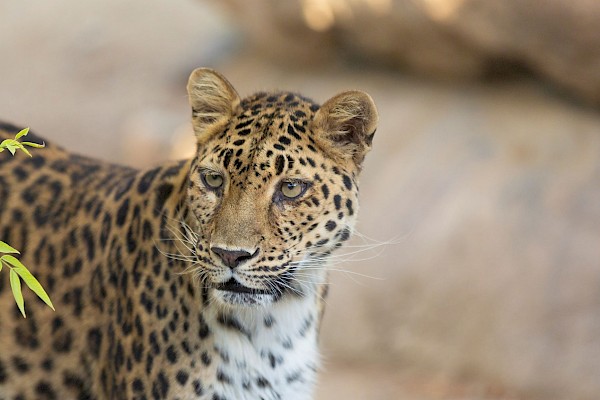 Critically endangered, IUCN. One of the most endangered cats in the world.

The Amur leopard is one of many species of animal that zoos are conserving through captive breeding.

The Amur leopard is the most northerly subspecies of the leopard species that occurs over most of Africa and southern Asia. It has a tawny-gold coat patterned with the distinctive black rosettes common in all leopards. The head, lower limbs and belly are covered with these solid black rosettes. Leopards eat just about any animal they can catch, including birds, hares, beetles, baboons or deer. Their principal predator is man, who hunts them for sport and their spotted pelts.

Leopards are solitary except during the mating season. Only females raise the young, litters of two to four cubs born after a gestation is approximately 96 days. Cubs remain with their mother for 18 to 24 months, when they become independent.

Hunting mainly at night, they stalk and ambush their prey by waiting in a tree until their quarry is within striking distance, then attack with a short burst of speed, grabbing their victim and strangling it. They are very strong and will often drag their kill up into a tree. This allows them to eat their meal at leisure, away from other large predators. Leopards have also been known to eat carrion.