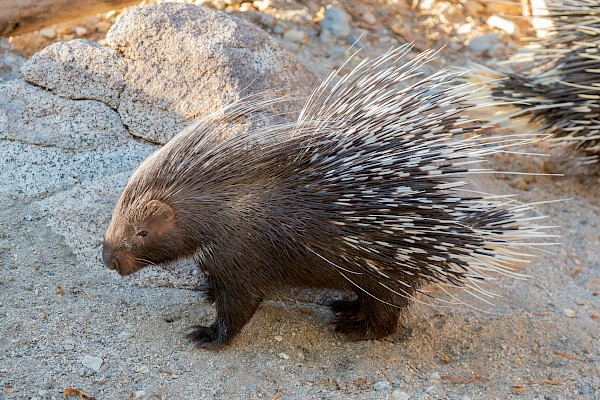 Sub-saharan Africa excluding the coastal deserts of the southwest

Adaptable – found in forests, on plantations, in rocky or mountainous areas and in deserts.

They cannot shoot their quills.

They are mostly vegetarians, feeding on wild roots, bulbs, berries and other plants. In cultivated areas they eat groundnuts, potatoes, pumpkins, melons and maize. Lions have been known to prey on Cape Porcupine.

Adults grow to 25-29 inches long and weigh from 20-66 pounds. The quills on the neck and back are black and white and the tips of the tail quills can range up to 20 inches long. They make a rattling sound when the porcupine feels threatened. It is sometimes called a crested porcupine because some quills can be erected into a crest, which starts at the top of the head and extends to the shoulder.

Females produce 2 to 3 litters of 1 or 2 young every year, in a grass-lined burrow. Babies are covered with bristles and soft quills which harden a few hours after birth. The mother nurses them from teats located on the sides of her body, away from her quills.
When attacked or annoyed, porcupines raise their quills and rattle them vigorously to scare off predators. They may charge sideways or backward, detaching quills into the flesh of the attacker. Once barbed quills enter the skin, they are almost impossible to remove and the wounds become infected, eventually killing the attacker.