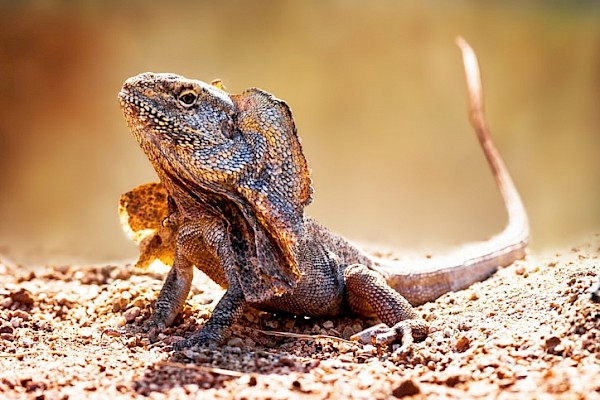 Frilled-neck lizards have three middle toes and can run on their two hind legs.

They are a fairly large lizard and can grow up to nearly three feet in length. A member of the dragon family, they get their common name because of the large ruff of skin which usually lies folded back against its head and neck. When frightened it will spread out its frill in a most dramatic way. Their color can be brown or grey with the frill being lighter and often tinged with orange or reddish-brown. Males are bigger than females and have a more robust appearance. There are two long, pointed canine-like teeth present in the lower jaw, which can inflict a painful bite.

They feed primarily on small invertebrates and have been known to feed on small mammals. The frill-neck is classified as a forager, which means they generally don’t go after moving food and usually will stay in the tree and wait for their food to come to them.

Due to its relatively large size, the frilled lizard has only a handful of predators within its natural environment. Large snakes are the most common predators of the frilled lizard along with owls, dingos, foxes and birds of prey that tend to hunt the smaller and young frilled lizards. If the lizard is cornered, it usually turns to face its aggressor, erects the frill by opening its brightly colored pink or yellow mouth. This sudden apparent increase in size and bright mouth color is sometimes accompanied by hissing, standing up on its hind legs, and leaping at or chasing the predator.