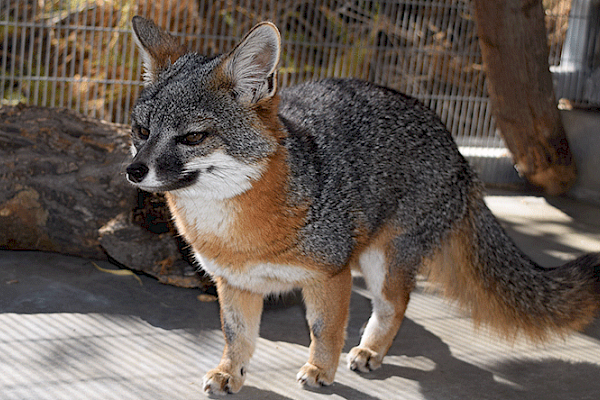 The IUCN lists this species as Near Threatened, an improvement from its previous status of “Critically Endangered”. The Living Desert has helped in this recovery. We were involved in establishing and monitoring ex situ island populations while threats to the wild population were ameliorated. We also provided captive husbandry expertise and participation on the federal recovery team.

The Channel Islands off the coast of southern California. There are six distinct subspecies which are recognized, one on each of the islands where they occur. Each island fox population is recognized as a separate endemic or unique subspecies.

The smallest North American canid found only on California’s Channel Islands is a descendant of the mainland gray fox (Urocyon cinereoargenteus), the island fox evolved into a unique species over 7,000 years ago, retaining similar markings to its ancestor but evolving to be just two-thirds of the size. The coat of the island fox is a grizzled mix of greyish-white and black, while the underside is a dull white. The ears, neck and the sides of the legs are usually cinnamon- colored and the chin, borders of the lips and the area between the eyes and nose are black. The tail has a well-defined, black, narrow stripe along the top.

Island foxes are thought to have evolved in the three largest northern Channel Islands and were moved to the three largest southern Channel Islands by the Chumash native people who traded with the Gabrielino people of the southern islands. The Chumash considered the fox to be a sacred animal–a pet of the sun, and possibly a dream helper. The Island Chumash performed a fox dance and probably used the pelts of foxes to make articles like arrow quivers, capes, and headdresses.

In the 12 years (2004 -2016) since it was listed as an endangered species quick and effective actions have taken place to facilitate their recovery. The key efforts which contributed to this recovery included: captive breeding and reintroduction of island foxes, capture and relocation of golden eagles, vaccination of foxes against distemper, and larger ecosystem recovery actions of bald eagle restoration and nonnative ungulate removal (pigs, deer and elk).