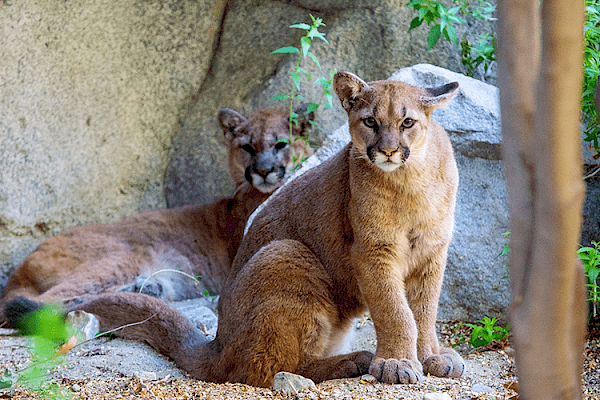 Historically – Coast to Coast in North America and from southern Argentina to south eastern Alaska. Currently – Extirpated from most of eastern North America

Despite its size, it is more closely related to the small cats, and like them, purrs (due to an ossified hyoid bone in the throat) and cannot roar.

The Mountain Lion is a large, low-slung sandy-colored cat with a small head and a long, heavy rope-like tail. The tail makes up nearly half of the total 6–8-foot length. Males weigh from 100 to 200 pounds; females weigh from 80 to 110 pounds. The tail is long, cylindrical, and about one-third of the animal’s total length. The limbs are short and muscular.

The mountain lion prefers deer, which it captures by stealth, stalking and pouncing upon its prey. A mountain lion must kill to survive, and it is well-equipped to do so. Forward-pointing eyes give it superb binocular vision. A heavily muscled body enables rapid bursts of blinding speed, and huge leaps and razor-sharp claws grip its victim during attack. Powerful jaws with sharp canine teeth bite the neck, severing the spinal cord, and blade-like carnassial teeth slice through hide and flesh. After gorging on its kill, a mountain lion will cover the remains with leaves and debris, returning in a day or two to feed again, then move on and may not kill again for 10 to 14 days. A mountain lion will take elk if they are available, but when large prey is scarce, it will eat anything it can catch: raccoons, porcupines, squirrels, rabbits, foxes and even skunks.