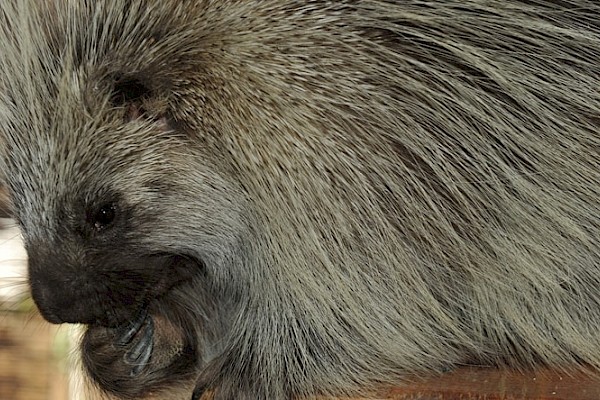 The North American porcupine is a good swimmer, its hollow quills help keep it afloat.

The North American porcupine is the second largest of all rodents in North America. It has a small head, a large, chunky body with a high arching back and short legs. Its head and body are 25” to 40” long, with a long, thick, muscular tail growing as long as 8”. It weighs from 10-40 lbs. Long, yellowish guard hairs cover the front half of its body while up to 30,000 quills are interspersed among the dark, coarse guard hairs of the back and tail. The porcupine’s feet have 4 toes on the forefeet and 5 on the hind feet, all with long, curved claws and small textured knobby pads on the bottom.

Entirely vegetarian, they eat evergreen needles, tree bark, buds, tender twigs, roots, stems, leaves, flowers, berries, nuts, and other vegetation. Porcupines are also known to gnaw on bones and antlers from the ground due to their high mineral content. The two large, front gnawing teeth continue to grow as long as the porcupine lives.

When threatened, the North American porcupine places his snout between his forelegs and spins around presenting its rear to the enemy. If attacked, contrary to popular belief, the porcupine does not throw its quills; instead, it drives its tail against the assailant and dozens of quills detach easily from the skin to remain embedded in the attacker. If hit in the face, a predator such as the wolf, bobcat or mountain lion may die of starvation when they find it impossible to remove the quills and are thus unable to eat.