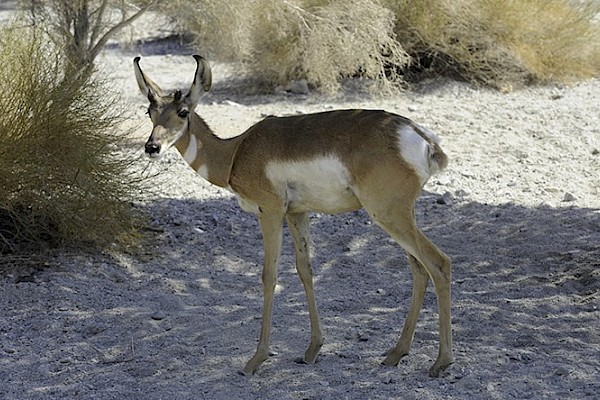 They are the world’s fastest living hoofed mammals and the second-fastest land mammals.

Endemic to North America the pronghorn has a deer-like body, weighs between 90 and 125 pounds, and stands about 3½ feet at the shoulder. It has large, protruding eyes and a white or buff 4-inch tail. The upper body and outside of the legs are tan to brown. The cheeks, lower jaw, chest, belly, inner legs and rump are usually white. The male has a broad, black band down the snout to a black nose and black neck patch, together with black horns.

The eyes of pronghorn are exceptional. They can pick up movement from as far as three miles away. The eyes are located far back on the head so they can keep watch even while the head is down during feeding. They can run at 40 to 60 mph for one hour or more. (Cheetahs run up to 70 mph, but only for about 300 yards.)

Pronghorns’ cloven hooves are padded to absorb shock from strides of over twenty feet at top speed. Their oxygen consumption is three times greater than that of other similar sized animals; the windpipe measures up to two inches in diameter. By comparison, a human’s is three-quarters of an inch. Pronghorn also have an enlarged heart and lungs to aid oxygen consumption, and run with mouth open and tongue hanging out to take in more air.

* Note: This information applies only to this subspecies not the entire species population.