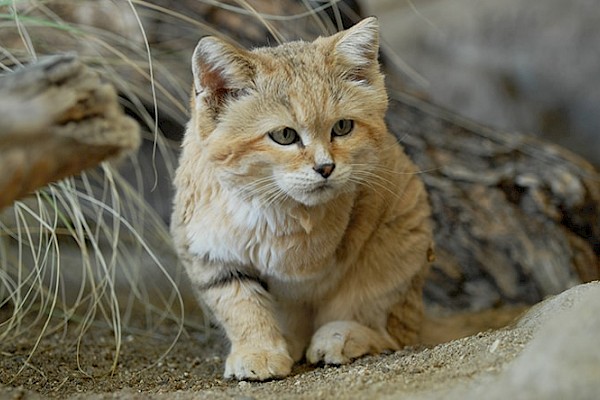 Deserts of N Africa, Arabia and east to Pakistan.

Prefer dunes but will live in rocks.

Sand cats have an exceptionally large middle ear cavity making them extremely sensitive to the small scratching sounds of burrowing rodents as well as large ears that can swivel and funnel sounds to the inner ear.

Slightly smaller than a domestic cat, it has short legs, a wide head and large tapered ears. Head to tail 32”, 10” tall and weighs 4-5 pounds. Pale sandy with white belly, reddish streak from eye across cheek, some dark striping on legs and tail. Tail has a black tip.

Well adapted to desert. Conserves water by spending the heat of the day in a burrow or in the shade. Fur on soles of feet insulate against the burning heat of the ground as well as giving traction on loose sand. Its loud barking call communicates over vast areas of desert (sound does not carry well in dry air). And like many other desert animals, it can live without drinking free water; it gets sufficient moisture from the bodies of its prey.