The Once and Future Sonoran Pond

At full capacity, The Living Desert’s Sonoran Pond—which homes the endangered desert pupfish—could once hold more than 140,000 gallons of water over 14,000 square feet of surface area. However, years of overgrowth of an invasive species of cattail choked the pond and restricted its capacity to just 10% of what it should be. Under different circumstances, the cattails would have simply been removed, but following federal guidelines to leave the pupfish undisturbed meant leaving the cattails as well.

This changed in November 2019 when The Coachella Valley Mountain Conservancy issued a grant to The Living Desert through California’s Proposition 1. This grant enabled our conservation team to restore the Sonoran Pond, led by Conservation Biologist Kyle Mulroe and Senior Conservation Biologist Sarah Greely. A team of AmeriCorps volunteers helped machete the cattails and were able to remove the invasive plant by the load. While the unruly vegetation was managed, the California Department of Fish and Wildlife (CDFW) caught the remaining pupfish using small minnow traps. Those few and precious fish were relocated to the Chase Pond in front of our Chase Administration Building. Surprisingly, CDFW found more than pupfish and also discovered 47 common goldfish in the water. These fish were likely the great, great grandchildren of goldfish that had been illegally dumped into the pond years ago. The goldfish were removed, as they are both competitors and predators of the desert pupfish.

Originally, we suspected the pond still had open water beneath and between the cattails, but it was only a mass of roots and decaying grasses—there was barely any habitat left for the desert pupfish. So, in late February 2020, the heavy machinery needed to dredge the pond arrived. The conservation and construction teams worked around the clock over a weekend to pump the remaining water, and after five days of work the basin was clean and ready for restoration.

This past summer, five hundred desert pupfish were rescued from an oxygen-starved environment at Salt Creek and relocated into the restored Sonoran Pond with help from Dr. James Danoff-Burg. Kyle Mulroe designed a saltwater ecosystem within the newly rehabilitated Sonoran pond to utilize the natural adaptation of desert pupfish that enables them to survive in higher salt concentrations, while suppressing the growth of cattails (and discouraging common goldfish). The salt was mined from a salt dome aquifer near Joshua tree, and the pond has now begun supporting aquatic insects and arthropods, water plants and algae, in addition the desert pupfish. We are glad to report that the pond is stabilizing and a complete ecosystem is forming within and around the pond. We are currently erecting a new conservation information station by the pond and planting native vegetation from Salt Creek propagated by on grounds by our Garden Department. 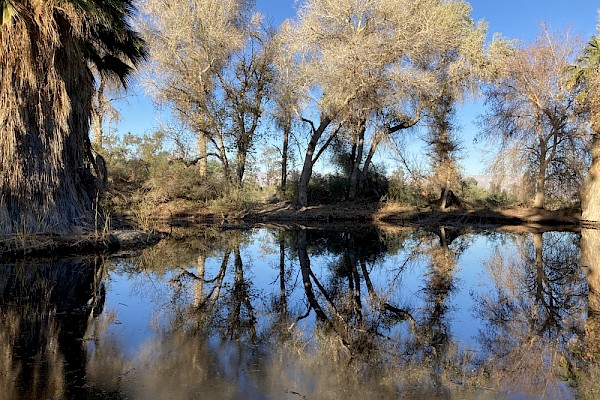 Dr. James Danoff-Burg sealing cracks in the basin of Sonoran Pond, after the cattail and water removal. 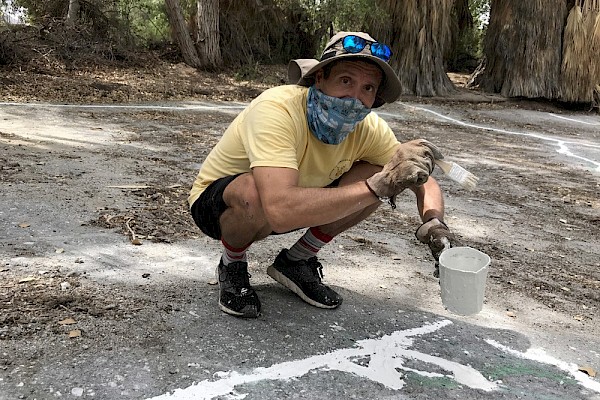 Sonoran Pond seen from the staff road during vegetation removal. An Americorps member sits beside a cottonwood to wring the mud out of her socks while in the background Americorps members continue with cattail removal. 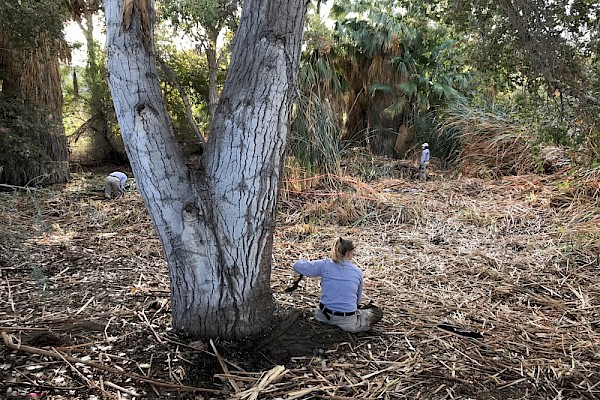 Heavy machinery removing hundreds of tons of mud and cattail roots from the pond basin. 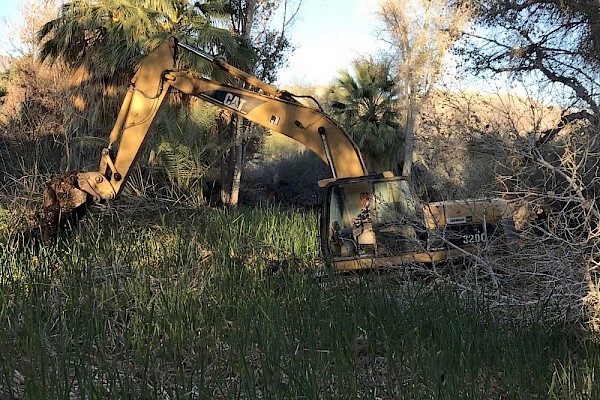 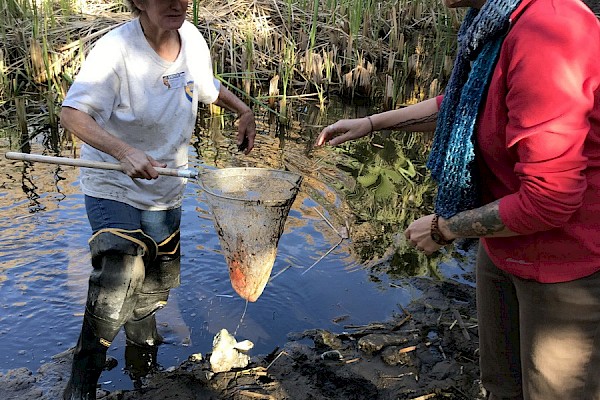