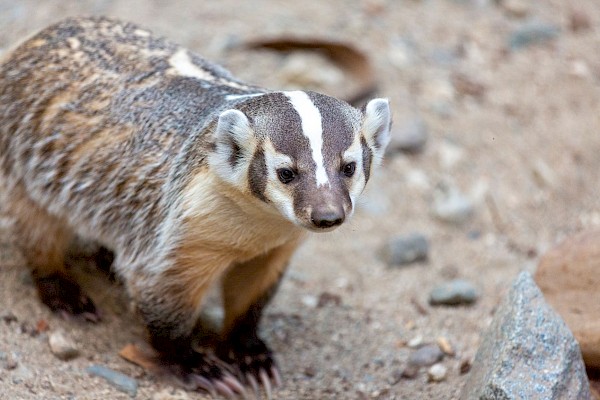 From S.W. Canada into central Mexico and Baja, and east into Ohio.

The badger is well known for its incredible ability to DIG!

Badgers are large, from 25-30″ in length, and weigh from 15-25 lbs. Their fur is long and grayish, with a white dorsal stripe extending from nose to rump, black patches on their face, a short tail and small rounded ears. Their claws are long and sharp.

Nocturnal, elusive and seldom-seen, the badger has several sleeping dens within its territory. These burrows give shelter to other wildlife but can be hazardous to livestock, and ranchers sometimes kill them for this reason. They are also killed by poison bait put out for coyotes and by eating poisoned rodents, even though they benefit man as rodent control.

They hunt mainly burrowing rodents but also other small animals and sometimes carrion. They have few predators. Badgers are fierce fighters, able to drive off an attacker many times their own size.

Badgers are solitary all year until mating season in late summer or early fall. 1-5 babies are born blind in a large dry-grass-lined burrow in spring. The young remain in the burrow for 5-6 weeks, leaving at the end of the summer. The father takes no part in raising them.

The badger’s period of winter inactivity (not true hibernation) coincides with that of the ground squirrel, its favorite food.