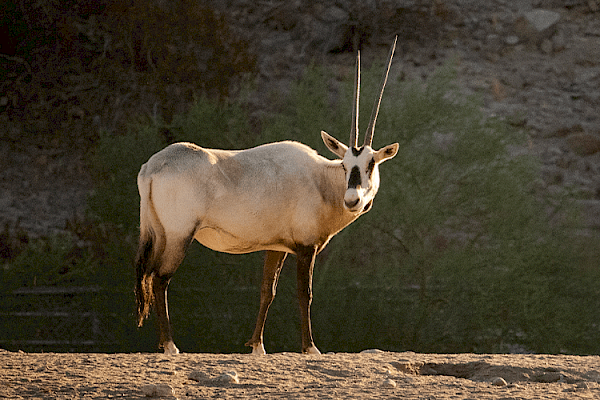 Bovidae, the cow and gazelle family

The Arabian and Sinai Peninsulas, parts of Jordan, Syria and Iraq.

They are often called the “unicorn of the desert”, because, when you look at them from the side, they appear to have only one horn.

One of the grazing antelopes, this smallest oryx has a white body with black markings on the face and legs. Their horns, which measure up to 2 1/2 feet long, are nearly straight and their hooves are splayed and shovel-like.

They eat whatever vegetation is available, feeding mainly at night when it is most succulent. They do not need to drink free water, getting their moisture from plants and occasionally digging hollows under rocks and bushes with horns and hooves for shade. Before becoming extinct in the wild, they were preyed upon by Striped Hyenas, Arabian Wolves, Lions, and Bedouins. Herds usually consist of 10 to 20 animals, with one dominant male mating with the females.

As true desert specialists, they survive through several adaptations, such as remaining in the shade during the daytime; excavating scrapes in shady ground and lying down to offload body heat to the cooler sand and reduce body surface exposed to drying winds. Their temperatures can rise to 113F without ill effects and no valuable water is wasted by sweating or panting. Oryx may travel 10 to 20 miles at night to new feeding areas.