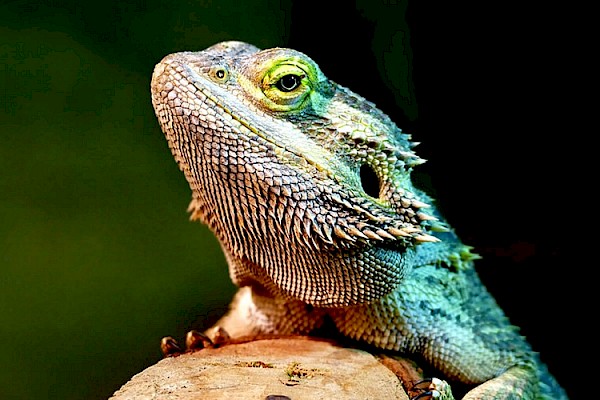 The name “dragon” comes from the color of the interior of the mouth. When opened, it gives the appearance of breathing fire. This action is used to deter predators or male rivals during the breeding season.

This mid-sized stocky arboreal lizard has prominent spines along its sides, a large triangular head and a spiny jaw pouch that looks like a beard when swollen. The color on its upper parts varies from shades of brown, gray, reddish-brown to bright orange while the ventral surface ranges from pale to dark gray with white elongated spots edged with black.

Mature males have dark beards that become black during courtship and breeding. Adults can grow up to 2 ft. in length, the tail accounting for more than half of this and males are larger than females. They are omnivores, consuming many types of insects, small vertebrates and vegetation including fruits and flowers. They are preyed on by dingos and monitor lizards. They reach sexual maturity at one to two years of age and females lay clutches of from 11-30 leathery oblong-shaped eggs in early summer in nests dug in sandy soil. The young hatch unattended three months later. Forming a shield-like structure around the snout is a spiny jaw pouch which, when inflated, looks like a beard and is used in courtship displays as well as to deter predators from attacking.