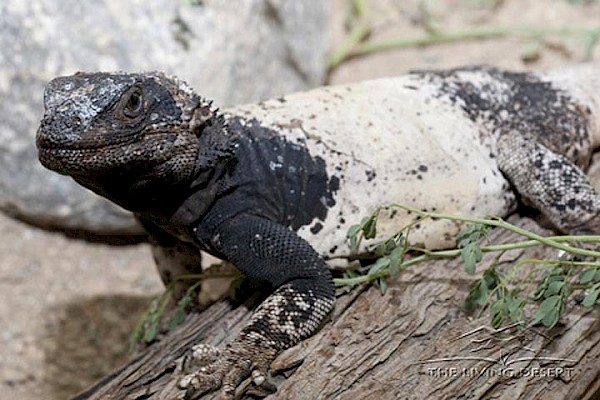 The Sonoran Desert and Mojave Desert of southwestern North America.

When threatened, they will dive into a crack in the rocks and gulp air until their body inflates and becomes wedged so tightly between the rocks that they cannot be pulled out.

This is a large, stocky, wide-bodied lizard. Males have reddish-pink to orange, yellow or light gray bodies and black heads, shoulders and limbs, while females and the immature have bodies with scattered spots or contrasting bands of light and dark in shades of gray or yellow plus banded tails. Males are generally larger than females, and possess well-developed femoral pores located on the inner sides of their thighs which produce secretions believed to play a role in marking territory.

They are herbivorous, eating buds, flowers, fruit and leaves and obtaining moisture from their food. Their 4-6 month activity period is closely regulated by food availability and they usually retreat into estivation by August and into hibernation during the cooler months.

They are preyed on by golden eagles, hawks, ravens, roadrunners, coyotes, kit foxes, bobcats and snakes. Their tails will detach if grabbed by a predator, allowing them to escape, but they do grow back.

Males defend their territories against other males with head bobbing, pushups and by chasing their rivals away. After courtship displays of head-bobbing, from April to July, mating occurs, and females lay 5-16 eggs, which hatch in late September.