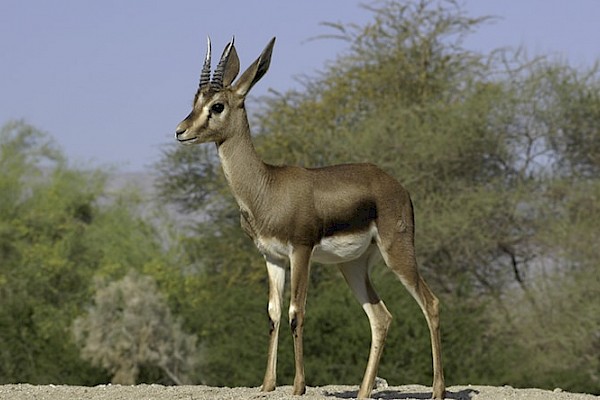 Bovidae, The cow and goat family.

Vulnerable, IUCN. Their numbers are dropping due to over-hunting and habit degradation.

The local Arabic name for them is “edmi gazelle”.

Usually found in small herds, rarely exceeding seven individuals, it is the only surviving gazelle endemic to the area north of the Sahara Desert. Its coat is dark fawn in color with distinctive dark brown lateral bands, and dense due to the cold desert climate of its mountainous habitats. Both males and females have curved ridged horns.

It is herbivorous, sometimes living in areas of sparse vegetation, but will seek out cultivated fields, mainly feeding in morning and late afternoon on grasses, herbage and bushes. It can utilize water found in plants as well as dew. Man is now the main predator, but cheetah, leopard, lion, serval, caracal, jackal and eagles preyed on it in times past.

There are two calving seasons per year, from April to May and July to August, with births occurring after a gestation of approximately 160 days. Usually only one calf is born but there is a 40% chance of twinning with each pregnancy. They can live up to 12 years.