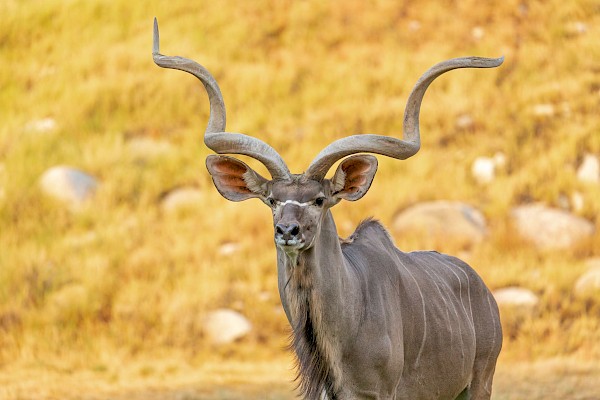 Bovidae, the cow and gazelle family

Woodlands, scrub, and open forests up to 8,000 feet

This antelope is easily distinguished by the male’s spectacular spiral horns, and the six to ten thin pale stripes against its tawny-brown to grey-brown body. Female greater kudus are smaller than males, and lack the impressive horns. The coat color of the females is also different, varying from sandy yellowish-grey to russet, against which the thin stripes are conspicuous. Both sexes have a crest of hair that runs along the middle of the back and forms a mane, and there is a distinct white band across the face between the eyes. Their large, rounded ears give a slightly comical appearance.

They are shy and their large ears are extremely sensitive to noise. If they can they will move away from potential predators but if they have to flee they do so with large jumps. Despite their bulky size, greater kudus are remarkably agile and are surprisingly adept at jumping.