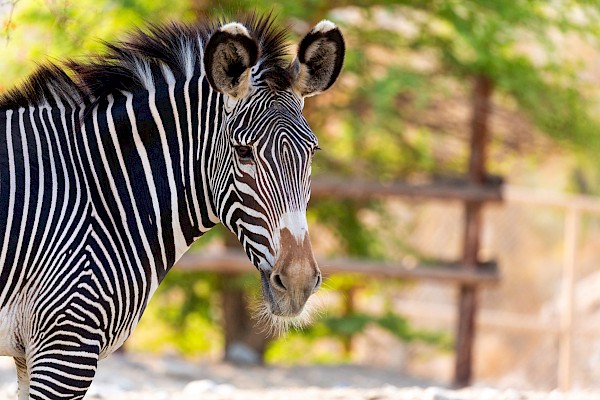 It is widely believed that this zebra was the famed “Hippotigris” (horse-tiger) of the Roman circus. The first specimens known to the scientific world were named for President Grevy of France, so although the species may have been new to science, it was known to earlier Europeans.

They are horse-like with big, rounded ears, a long, narrow head with very narrow and numerous black stripes on body and legs, but not the belly or around the base of the tail. Grevy‘s zebras are the largest of all wild equids.

Grevy’s don’t form herds like other equines; instead one male defends a small territory with a watering hole. Females who wander into the territory mate solely with the resident male. One foal is born after a gestation period of approximately 13 months, usually between May and August, although they can breed all year. The foal has brown stripes and a mane which stretches from shoulder to tail, and can stand on its feet within one hour of birth, running with the herd after only a few hours. They reach independence from the mare sooner than other equids. Grevy’s eat mainly grass and spend most of the daylight hours grazing. They prefer tender shoots but usually have to eat coarser grass. Leaves, bark, buds and fruit are also eaten. Their predators are primarily lions and African wild dogs.