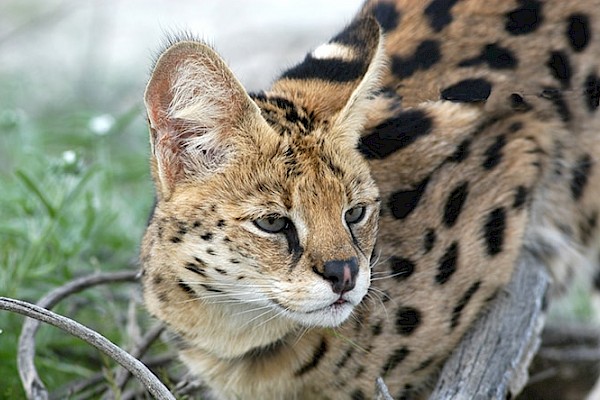 Throughout Africa, except for equatorial jungles or the Sahara.

They can jump up to 10 feet to catch birds in flight.

The serval is one of seven species of small to medium-sized African cats. It is slender and long-legged with hind legs longer than front legs. Its head is small, with large rounded ears to help find prey, a long neck and a yellowish tan coat with black markings–different for each serval–to break up its outline, and a light colored underside. Males are slightly larger than females.

Their territories cover up to 5 square miles in areas with good cover for hunting and a water source They eat a wide variety of prey including rodents, small ungulates, birds, lizards, frogs and insects. They require a fresh kill and will eat carrion only under extreme circumstances. Their natural enemies are hyenas, African wild dogs and leopards.

Servals only pair up for mating. A litter of 1-3 kittens is born in a den during the summer months and they are moved frequently to new hiding places. The mother raises her kittens alone and must leave them frequently to hunt. When the kittens are large enough to hunt, males are driven away first, while females stay with their mother until they become sexually mature when they will be driven away to establish their own territories.