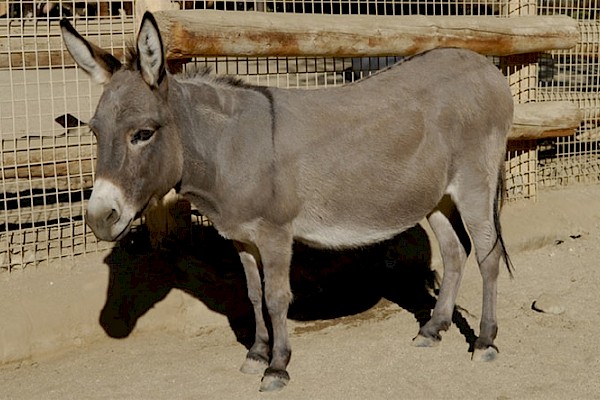 If a group of donkeys is attacked, they will form a circle and fight the predator with their hooves.

This is a miniature breed of donkey, whose coat comes in various colors (black, brown, white or spotted), but is most commonly gray. They are only 28 to 38 inches tall at the withers (shoulder) and weigh between 250 to 450 pounds. They eat hay, grass, oats and grain and graze from dawn until late morning and then again in late afternoon. In open range, they may be susceptible to large carnivores.

Donkeys are widely distributed and can be found almost everywhere in the world. However, true wild asses originated in the undulating deserts of northern Africa and the Arabian Peninsula and are well-adapted for life in the desert. Domestic donkeys prefer warm, dry climates, and if left to become feral, they will return to such a habitat if possible, for instance, the wild population in Death Valley.

Breeding occurs primarily during late spring to early fall and after a gestation of about 11 months, one foal is born. They usually reach maturity at around the age of 1 or 2. They are highly resistant to diseases, and remain healthy into old age, which can be over forty years.