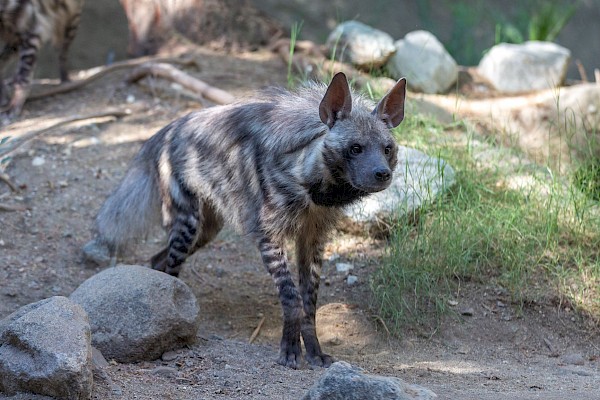 The closest living relative to the hyena family is the civet family, and they are more closely related to the cat than the dog family.

Dog-like in appearance, the Striped Hyena has a big sturdy head. Striped hyena faces are generally black with a black patch of fur under the chin and large pointed ears. Their front legs are longer than their hind legs. Their fur is grey-brown with vertical black stripes along the sides and legs and they have a thick mane that runs from the nape of the neck to the tip of the tail. Their vocalization is a soft howl or snarling sound and they have elaborate greeting rituals.

Their diet includes carrion, tortoises, small animals, livestock, insects, vegetables and fruit. Their jaws are strong with large teeth for crushing bone. Almost completely nocturnal, hyenas forage alone or in pairs. Although they occasionally share large carcasses, group members rarely eat together, avoiding direct competition for food which may be brought back to the den for their cubs.

They have no real predator; however, because they feast on the kills of other, larger predators, confrontations are inevitable and because they are solitary, they tend to back down rather than fight larger carnivores.

They mature at two to three years and can breed at any time of the year. After a gestation of about 90 days, two to four pups are born which are weaned at four months.