I have rarely seen as quiet and respectful a community gathering as tonight. The Applied Environmental Research Foundation and I visited a small rural tribal community of indigenous people (collectively referred to as Adivasi) in the foothills of the Western Ghats, with an aim to encourage them to adopt the use of a fuel-efficient bio-stove. This stove, called a MyForest stove, is so fuel efficient that it may reduce wood consumption by half!

As we sat on the meticulously cleaned marble floor of the Dattatreya Temple, sweating in the high heat and humidity, the two community conservationists from AERF made their pitch. Over 80 people from the Adivasi community listened attentively. The lovely traditional saris of the women beautifully complimented the novelty of the setting for me. The Hindu deity Dattatreya is a combined avatar of Brahma, Vishnu, and Shiva, and he peered out at the assembled proceedings. Overhead, the huge ceremonial drums rested in the rafters, reflecting the multicolored flashing lights.

At first, the setting felt personally alien. After sitting with this feeling for a while I realized only the details felt odd. Really, it the same sort of gathering happening in churches, synagogues, and mosques across the US. "Come to the church basement and learn about how to care for your family." Same thing, just a different deity.

That said, I've never been to a presentation at any religious congregation like this. We arrived for the 7:00 start which slid into 8:00. Nonetheless, seemingly everyone in the community came out to see the presentation. We were the Big Show tonight, preferred over whatever cricket match was on. Omkar and Akash, with Akshay's support, spoke about the importance of the forests that are all around them. The photos and videos of the animals, as recorded on their camera traps were particularly well received with gasps of recognition and excitement at seeing animals that they had never seen but had only heard about moving around.

If they could build appreciation for the local biodiversity, then people would want to conserve their natural heritage. People laughed at their jokes, answered their questions, and got excited at the photos and videos. Although it was all in Marathi, their pitch seemed perfect.

After convincing people that their forests were valuable and important, another pair of AERF staff members spoke about the benefits of the fuel efficient stoves. Rajesh and Karn respectfully spoke about the many savings that using the stove posed to the community members, and to the women in particular. These many savings included time savings since they did not need to collect as much wood, money saving by not buying wood for some, health costs by reducing the amount of airborne carcinogens because the stove burns so clean, and in cooking time because the stove burns so much hotter than the traditional open fire. There were many benefits to adopting the stove.

Next, was the oddest thing I have experienced on any religious setting like this - we lit a lot of things on fire. The MyForest stove uses a small amount of wood chips and burns so hot that it makes a blue flame - not seen on the traditional open cooking fire. Because it burns without smoke once it starts, Rajesh and Karn confidently started this large fire in stove in the Temple. It was an impressive demonstration, which sold me and the rush of people who came up afterward on the process.

Reducing fuel consumption among communities living close to the conservation areas is only one component of reducing deforestation, but it is an important one. Working with communities in a way that respects the cultural norms and beliefs of all involved - tribal hillside communities and conservationists alike - is a core approach of Community Based Conservation. The capacity building training I am involved in here with AERF flows between all of us involved, whether trainer, staff, or community, with mutual respect all around.

Lets hope that Brahma, Vishnu, and Shiva were all looking down favorably from the front of the Temple, and will encourage many of them to adopt these biostoves and thus conserve their forests, their animal biodiversity, women’s health, and their pocketbooks.

Everyone respectfully working together is the best way forward. This approach ensures that everyone wants to do all they can to reduce deforestation. 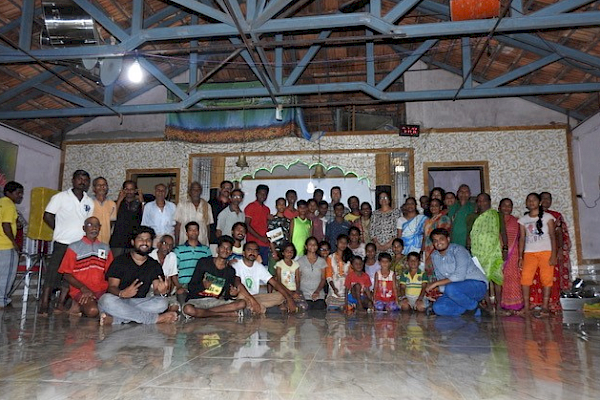 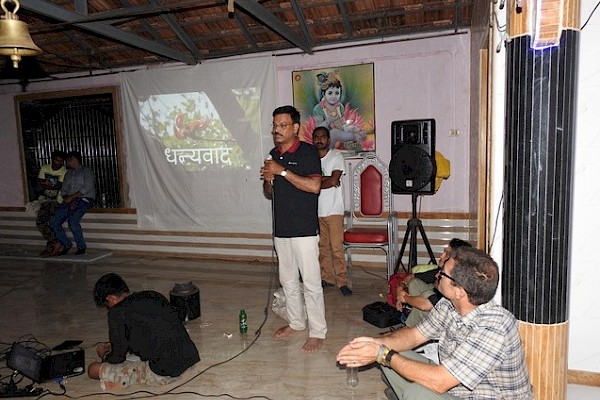 Presentation to the Advasi community. 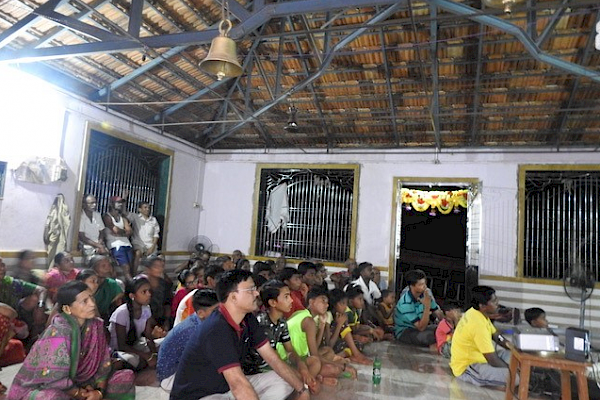